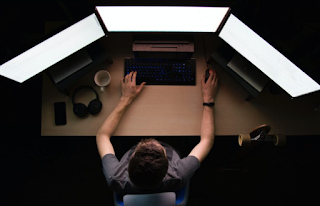 HTML is the standard Internet language for web page structure, text presentation, famous for its extensive use of tags, or labels that determine the type of text that should be on the page, for example, the script in this marked article begins <body> and ends with a tag</body>, as these HTML tags identify almost everything about texts on web pages from font size to internal and external links.

HTML is very common because of the proliferation of a large number of training courses that help you get started to learn this fairly simple language, and HTML has gained simplicity and ease from consistent rules that make it easier to learn its orders and functions.

HTML determines the content of your web page, and CSS is used to determine the appearance of each HTML element, where all the frames you see on a web page, including text boxes, background images, and menus are programmed through the CSS programming language.

Have you ever noticed how the web page itself is organised differently when viewed on your phone than on your desktop? This is controlled by the CSS programming language, which also controls the identification of visual, or hidden page elements depending on the size and accuracy of the screen.

CSS is a rule-based language, meaning that you determine how different types of texts and pages look by applying rules to each type of group specified in HTML, for example, you can use CSS to identify headlines, sub, make texts dark, green, or make all internal or external links appear underneath a red line, for example.

Learning CSS programming language won't be difficult for most people with general computer skills, word processing, and the Internet.

Because HTML, CSS can't directly integrate conditional phrases, and other decision-making functions, they're not considered full programming languages, but what happens if you want an interactive web page? For example, what if you want to add a drop-down menu, or a colour-changing button, and text when you move the mouse up, here you should highlight the role of JavaScript.

As a complete programming language, JavaScript is used to handle programming loops, make logical decisions based on input, such as when the mouse is passed over a list, or when you write something in the search box, and because JavaScript can output HTML code, or CSS, it is able to make web pages interactive and dynamic.

Although it's more complex than HTML, CSS is that JavaScript is one of the easiest real programming languages you can learn, it's a language that can easily be included with languages like HTML, and the other thing that makes JavaScript easy to learn is that you can write complex excerpts of code, test them in a web browser, if you know html programming language or CSS will already save yourself a lot of effort to learn JavaScript.

When you start learning Python, you'll discover that everything is simple, complex code is unacceptable, and it's easy to learn because there are many courses, whether free or driven, that teach you Python from scratch to professional so you can eventually program websites, apps, and games.

Since its debut in 1993, R programming has become the preferred programming language for anyone interested in statistical analysis, data science, or data exploration.

One of the reasons R is famous is that it is open source, which means it is free for use for personal, or commercial purposes, meaning that there are thousands of downloadable packages created by former users, which provide functions beyond the original code.

R is more popular among data scientists, data analysts, statisticians, science, technology, engineering, and mathematics professionals, and one of the reasons why learning R is easier than other languages is that each R function comes with clear explanations and examples of commands.

Compared to Python, which focuses on providing a single and simple solution to each problem, aimed at allowing multiple ways to achieve the same goal, this programming language gives Ruby the kind of flexibility that programmers like.

One of the reasons Ruby is famous is that programmers can change the basic parts of the language to suit their needs, for example if you prefer to use the word "Plus" instead of "+", you can simply do so through ruby programming language.

Ruby is a language that can be used for public purposes, particularly popular with web developers because it is commonly used to build web applications, and you can use it to process data, automation, web, and command line tools.

Once you start learning Ruby, you'll understand why it's called the exact balance language, and since many developers like to use it, you'll find many forums that offer you solutions to the problems you might fall into, with many code samples available online.

Although Java is old, it is still programmable, and constantly evolving due to ongoing tests and updates, Java developers are always confident that creating a Java app on any platform means that the app will work on all other major platforms, meaning that it is flexible and developers can use it not only on computers, mobile devices, but also in portals, consumer products, or any electronic device.

Learning Java is particularly easy because it's English-like, and there's a large support community that gives you instructions, answers your questions while learning Java, or working on it.

Go lang, called GO, is a general purpose programming language originally developed by Google as an alternative to C/C++ and was a language that combined the faster performance provided by C/C++ with simple software syntax.

It is an open source programming language, used in servers, web development, and even command line tools, as well as a variety of applications, such as cloud applications, and server applications.

How do you learn any programming language from scratch?